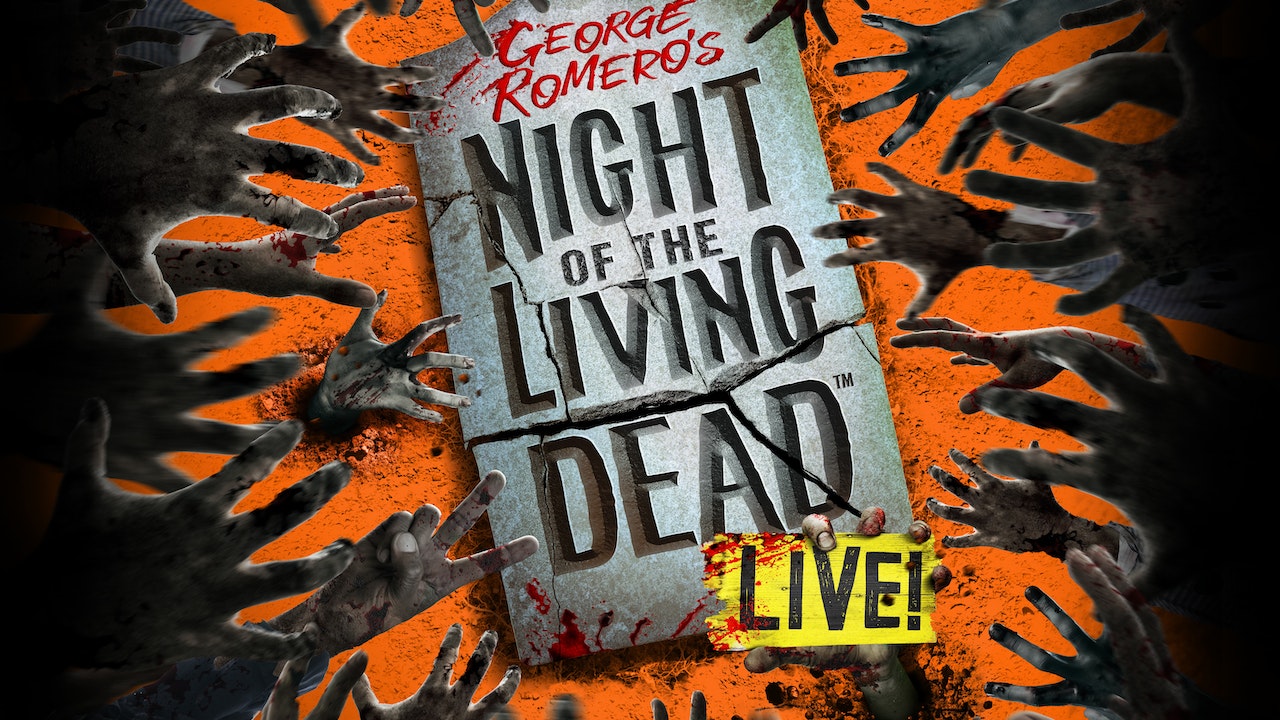 Night of the Living Dead - Live!

Night Of The Living Dead Live!

Director's Programme Notes:
Cult theatre is arguably one of the most difficult genres to get right. It's like arriving at a party where half the people there are expecting you to be as good as you have been at every prior party, whilst half the crowd have no idea who you are or why everyone is looking forward to seeing you. You walk a thin line between disappointing a group because you didn't live up to expectations, and disappointing a different - but no less important - group because they couldn't see any reason for you to garner such fascination. The way I handle it is to make your own damn party. I hope you enjoy, and do try the canapés; they're made with fresh brains.
Romero's Night of the Living Dead is a masterpiece. Part social commentary, part tense horror, it solidified a cultural feeling of angst and anti-consumerism at a time when America was feeling rather at odds with itself. 1968 was seeing huge upheavals in society in terms of race, gender, and capitalism, and Romero (some might say unknowingly) tapped into an artery of the American body that has stayed with it ever since: the feeling that, somehow, they were walking blindly towards a fate that was inevitable yet also intangible. The use of "ghouls" (Romero didn't call them zombies yet) became iconic because they were a mindless foe - unreasonable, unemotional, but fixated and hungry. Funny how today, in the UK, in 2019, we feel the same feelings towards a political system that is creaking and groaning under a fate that many suggest is inevitable and equally intangible. I'd love to say the piece was chosen to reflect that. Sadly, I'm not that sort of director, and this piece isn't that sort of piece.
Political b*llocks aside, Night of the Living Dead Live occupies a position which few other stage pieces do: comedy horror. The list of films, plays and musicals for this is very slim (go on, count them up, I'll wait here). It seems strange that the genre isn't more popular, as the two separate genres seem to go hand in hand. The comedy makes the horror more impactful, and the horror makes the comedy more a welcome relief and a brief sojourn away from terror (life clearly reflecting art). But judging that line is a tricky business and changes from audience to audience. I hope we've pitched it right (although, clearly, I'm placing the blame squarely on you guys if it doesn't land). Whilst doing a piece of Chekhov, Shakespeare or Pinter might garner rewards and critical hype, I can rest easy knowing the sweat, tears and arguments about the viscosity of blood that the company have put in delivering this to you.
On a final note, I just want to say something about fun. For me, as a theatre maker, but also for me at the end of a long line of professionals who have passed down years of skill and knowledge from generation to generation and ended up at yours truly, theatre can have the propensity to take itself very seriously. Throughout my career, I've only ever thought about what would be fun and cool to see on stage. Isn't that the reason we come to see stuff like this? Christ alive, the world might be turning to shit, but rest safe in the knowledge that at this little haven in Caledonian Road, we'll be here to scare the bejesus out of you and hopefully make a bit of wee come out in laughter.